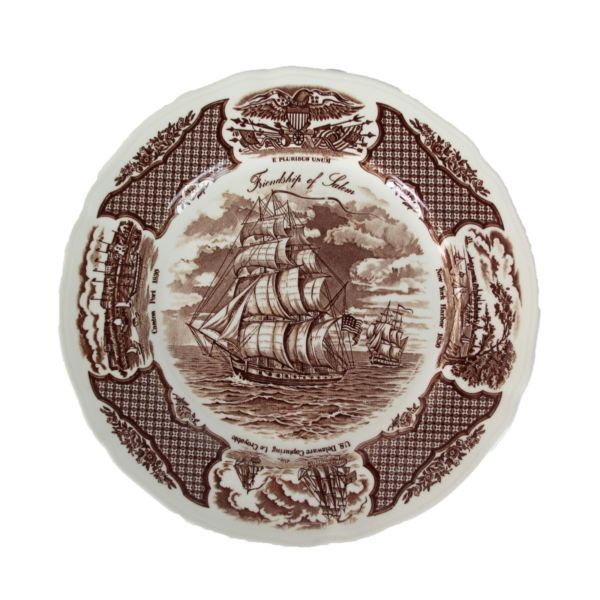 Alfred Meakin Pottery has been produced since 1875, in the Royal Albert, Victoria and Highgate Potteries in Tunstall, but Alfred Meakin played a relatively small part in its success. He died in 1904 and was succeeded by his son Alfred James, who died just 4 years later. The Pottery remained in the family though and retained the name, which remains popular with collectors to this day.

One of the most popular patterns from Alfred Meakin Pottery until 1910 was Tea Leaf, simple white crockery with a single line border and a small tea leaf hand engraved into the centre before being finished with a high glaze. It is unusual to find a complete set in good condition from this period but there are many single items or small sets to choose from. Other pattern designs from this period include Abercom, Derby, Oxford and Bleu De Roi.

From 1920 onwards, there are often more examples of Alfred Meakin pottery available for sale and it is possible to narrow your search by category; plates, bowls, platters and tureens all feature frequently in the listings and you may find larger sets in relatively good condition. Whilst the Willow pattern remains reminiscent of earlier periods, many of the designs found in the Art Deco period are lighter, brighter and more floral such as Marigold, Genoa, Luxor and Princess Fanfare.

Floral patterns continue over the next two decades, with Marilyn, Down on the Farm and Harvest Bouquet, seeming to take on a more rural theme. However, there are also some stark differences. For the first time, we see bowls and plates that are completely colour glazed on the outside and also multicultural influences such as Madras Indian and the striking Zambesi pattern.

This is the last listed period in Alfred Meakin Pottery and the rural feel continues with designs such as Hedgerow, Windswept, Springwood and Fair Winds. The stamps on these more recent additions to the collection often reflect a modern era, being dishwasher and microwave safe.