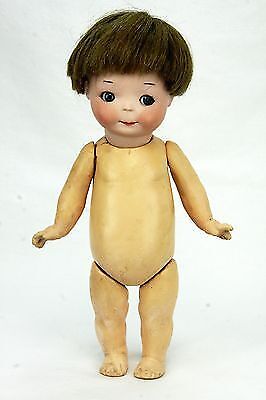 Originally made as playthings for children, many antique dolls are now collectors items. Dolls have been made for centuries, but most antique dolls on the market date back to the mid-1800s at the latest.

Antique dolls usually have heads made of bisque, china or wax. Some dolls are also made entirely of cloth. Among doll collectors, bisque refers to unglazed porcelain while china is glazed porcelain. Parian dolls are similar to bisque dolls. They are made of unglazed china, however, theyre now more commonly known as ‘untinted bisque.

Bisque, china and wax dolls are not usually made entirely of these materials, normally only the face was constructed this way. They have bodies made of materials like papier-mâché, leather, wood or cloth. Sometimes the arms and legs of bisque or china dolls are made of porcelain.

Many antique dolls feature glass eyes and wigs made of human hair or mohair. However, these features were also painted on to some dolls.

Originally dolls looked like small versions of adult women. They were the Barbies of their day as they were intended for children to dress in modern day fashions. In fact, a whole industry in Paris grew up around making outfits and accessories for these dolls. These fashion dolls were created by companies like Jumeau, Bru, Gaultier and Rohmer.

Production of childlike dolls began towards the later part of the 19th century. First came the French ‘Bébés made by Jumeau, Bru, Steiner and Gaultier. Between the 1890s and 1930s, Germany took over the market and dolls made by Armand Marseille, Simon & Halbig, K*R and Kestner were popular.

Other collectible antique dolls include Lenci dolls. These were made of pressed felt and manufactured in Turn, Italy, between 1919 and 1944. Chad Valley dolls are collectable too. Their early dolls were made of cloth or felt and between 1919 and 1926 they were designed by Norah Wellings. After this Norah set up her own company producing cloth dolls, the Victoria Toy Works.