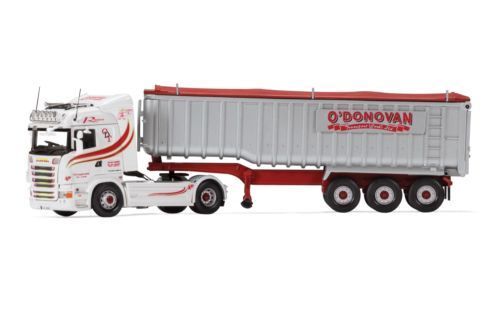 A range of Bedford replica vehicles are also available including trucks, buses, delivery trucks and ambulances. SImilar items can be found under the Scania maque, which includes diecast trucks , commercial vehicles and tractors or trailers.

A diecast toy refers to any toy or collectable model produced using the diecast method of metal casting using moulded molten metal. These toys are made from that metal and combined with plastic, rubber or glass details.

Early diecast models had multiple parts and rubber tyres, but they did not have glazed windows. However, in the 1930s as the company advanced in its technologies and its slogan soon became "The ones with windows!" All Corgi diecast vehicles were to set new design standards with more delicate lines and plastic inserts to produce coloured moulded seating, steering wheels and clear windows.

During this era, Corgis use of plastics was extended to its product packaging as well, creating cut outs on its boxes. These were glazed over with clear plastic film so that the car could be seen in all its glory on the toy shops shelves.

Some of the best known and most popular models of Corgi diecast vehicles were of celebrated cars from famous television programmes and are styled according to different eras. These include themed cars such as the Batmobile in many incarnations from Batman and several futuristic styled vehicles such as the White Falcon from Gerry Andersons Captain Scarlet television series.

The 007 Aston Martin DB5 from the James Bond movies remains to be the largest selling toy car ever produced. Other much sought after themed Corgi diecast cars include Chitty Chitty Bang Bang from the family film of the same name, which was released shortly afterwards in 1968.

The 1990s saw the company re-enter the world of television and films with the successful launch of Mr Beans Mini, the Inspector Morse Jaguar and the Morris Minor from Some Mothers Do Ave Em.

Corgi toys were first introduced to the UK market in 1956. At the time the Swansea based brand chose a Welsh breed of dog as its name to celebrate the companys heritage.