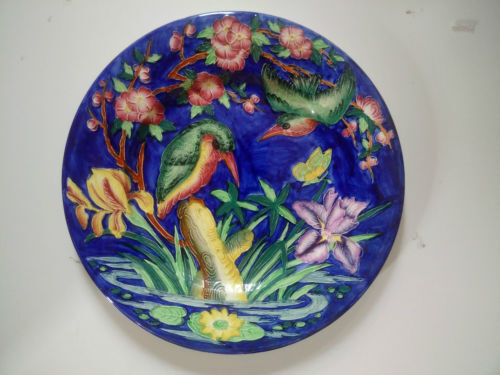 For over two centuries, Maling pottery was manufactured in the north east of England. The pottery was opened in 1762 near Sunderland and in 1817 they moved to Newcastle upon Tyne.

Maling pottery produced over 16,500 patterns in 200 years. Their output varied from high-quality, gilded pieces and lusterware that were sold in high-end establishments like Harrodss, to simpler pieces of kitchenware like basins and jars. They also produced containers for a number of manufacturers, including meat paste and marmalade producers.

Between 1908 and the early 1930s, many decorative wares made by Maling were marked ‘Cetem. Most marks contain the word ‘Maling, ‘ Cetem ware or ‘CTM. Until the 1890s some Maling pottery is marked with a bell inside a wreath, or simply a wreath. The initials RM and CTM appear inside the wreath.

Art Nouveau is a design style that was inspired by natural structures and forms. Shapes often incorporate curved lines to mimic flowers and plants. Maling and Cetem items produced at this time are often decorated with flowers, fruit or birds.

Maling and Cetem also produced high-quality commemorative items during this period. Look out for pieces that mark the death of Queen Victoria in 1901 and the coronation of Edward VII in 1902.

Whereas Art Nouveau was inspired by nature, Art Deco had a more modern feel. It was exuberant and combined influences from all over the world with rich materials and fine craftsmanship.

Maling and Cetem pieces from this period often feature heavy gilding and lusterware. Lusterware is porcelain or pottery that has a metallic glaze. This glaze gives the items a luxurious, iridescent shine, which catches the light beautifully.

Throughout the years, Maling produced a wide range of decorative items, many of which were sold at prestigious outlets. Jugs and bowls come is a variety of shapes and sizes, from large pitchers to dainty dishes for serving bonbons. Ginger jars, biscuit barrels and trinket dishes also make lovely decorations.