Save on Men's Razors 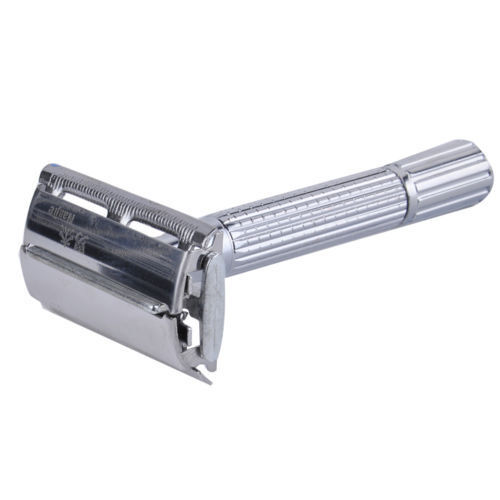 The technological design of mens razors may have changed over the years, but the way in which men shave will always depend on personal preference. Whether that is a close shave or with multiple blades or a classic straight razor, you will feel more confident after a good shave.

Razors that have a straight blade fold into the handle after use. They are also known as open razors or cut throat razors.

Razors that have a protective shield, or guard, that stops direct contact with the skin are known as safety razors . They incorporate a disposable blade .

The back shaver is a long handled wand that is designed for shaving the back. Some models feature a large removable blade, and others are designed for use with your favourite safety razor.

Differences between a straight razor and double-edge safety razors

A straight razor blade will produce a closer shave than a razor that is designed to avoid direct contact with the skin.

Double-edge safety razors generally operate a lift and cut system that features dull and sharp blades. The dull blades pull the facial hair out, and the sharp blades cut them off.

Men who prefer a straight razor typically shave every other day. Men who choose cartridge shavers usually see a five oclock shadow, and may need to shave again.

Straight razor shavers tend to view shaving as a personal ritual. Men who shave with a safety razor tend to want to get the shaving over and done with as quickly as possible.

The benefits of shaving with mens razors

Facial hair is a potential breeding ground for many types of bacteria. Mens razors provide a clean shave that improves cleanliness and hygiene.