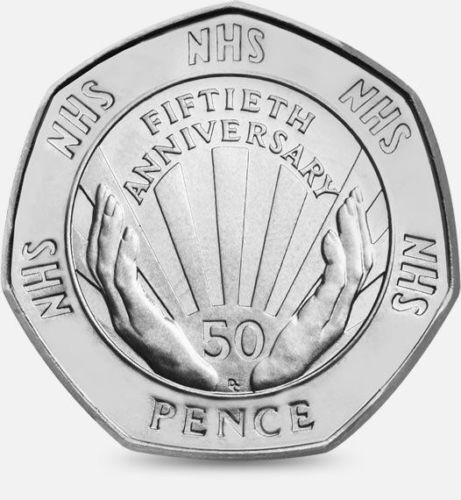 Browse NHS 50p to find a commemorative coin to add to your collection. Initially released in 1998, the coin celebrated the 50th anniversary of the birth of the National Health Service.

In 1948, the NHS was born, providing free medical care to the UK. This 50 pence coin commemorates the 50th year of the NHS along with the hard work that has held the institution in place.

Released in 1998, the coin was designed by David Cornell and depicts a pair of cupped hands set on a background of radiating light that falls on the top sides of the coin. At the top of this are the words FIFTIETH ANNIVERSARY and around the edges NHS is repeated.

All of these NHS 50p coins were released in 1998; however, 5,001,000 were minted, making them a fairly common coin to come across. Youll be able to pick up a coin that has been in circulation for as little as £1.

If youre looking for NHS coins that never entered circulation, however, youll be looking at upwards of £10. These will have come from specially purchased sets or presentation boxes that never went into circulation.

As the coins have been around for years and will probably have been exposed to air, they may feature some toning or discolouration that youll want to look out for.

The Royal Mint folders are blue with facts and dates from the history of the NHS from its beginning to the date of the coins release as well as important medical moments from before the NHS. The dates listed include pioneering medical moments such as the introduction of the oral polio vaccine and the first ever liver transplant.