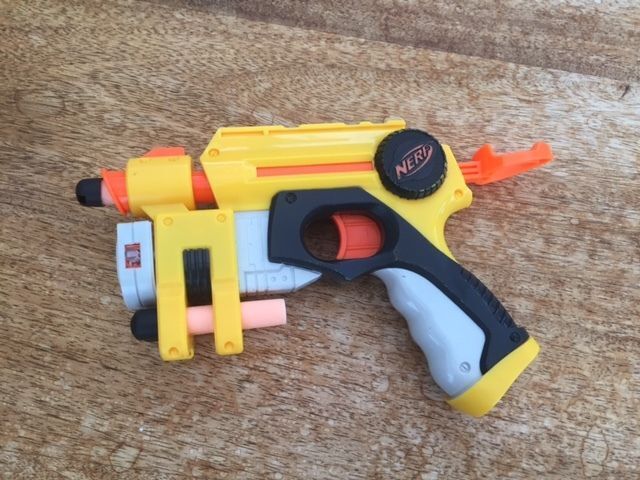 Never run out of ammo with Nerf gun bullets

Reload for another round of fun with the huge range of Nerf Gun bullets here on eBay. Nerf Gun bullets are soft, child-friendly ammunition for your Nerf Gun toys. Nurf Darts, discs, and rounds are available for all the Nerf guns in your toy arsenal, and the majority of bullets are cross-compatible with other brands of toy guns and blasters.

Nerf Guns use a variety of bullets, all designed to be child-friendly, harmless, and fun. Nerf bullets are typically made from a soft foam, with some older models also using plastic suction cup heads.

As of 2013, Elite Darts have been used in the majority of Nerf products excluding the N-Strike Mega and N-Strike Clip System ranges. Nerf Elite darts have a rounded foam head and a long cylindrical foam body. They are compatible with most other brands of toy gun.

Clip System Darts are smaller in diameter than standard Elite Darts and are only compatible with clip system toys.

Mega Darts are usually red in colour and used in N-Strike Mega range guns and other larger toy blasters. The Mega Darts are slightly larger in diameter than other nerf bullets.

Disc ammunition are flat, ‘Frisbee shaped rounds used by the Nerf Vortex and Zombie Strike ranges. As with the other Nerf products the discs are made from soft foam.

The high impact darts are rounded foam balls. The bullets are streamlined to fire further than standard Nerf rounds. It should be noted that a high impact round may sting slightly if it is fired from close range.

Many older rangers of Nerf products use suction head darts. Suction head darts are similar in size to standard Nerf bullets, although made of soft plastic rather than foam. A Nerf suction head will stick to a flat surface when fired from a Nerf Gun.