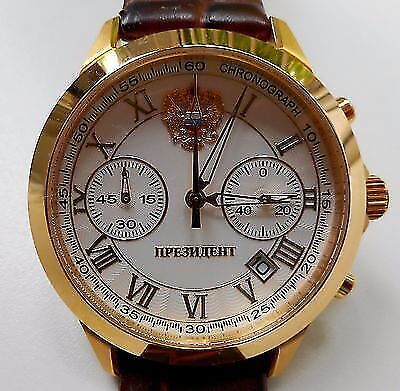 Poljot wristwatches are antique timepieces that date back to Soviet Russia. Poljot is a brand of Russian wristwatches responsible for producing the first large-scale Soviet watchmakers and manufacturers. They produced many historical watches that were used in space missions, Poljot translating as flight.

They have also produced many commemorative pieces which were limited edition models. Replica models of the famous historical watches are sought-after collectibles. Poljot no longer produce watches, but a lot of the vintage models can still be found. They are solid and robust and made with good build quality.

Watch lovers and those interested in aviation would do well to add one to their collection. Originally made for the Russian military, Russia is still the worlds largest manufacturer of Aviator watches . Many include highly complicated chronographs and big dials that are easy to read.

President watches were designed compiling the most demanding tastes of Russia at the time. All watches were mounted by hand at the First Watch Factory and then were tested on a machine to ensure that it adhered to strict quality control measures. They feature the Russian coat of arms at the 12 of the dial.

Another vintage design that is still popular with watch collectors is the Poljot 3133 chrono, which has a running second dial, a 30 minute counter subdial and a sweep second counter. The Poljot watch factory introduced the 31mm chronograph movement after purchasing machinery from the Swiss Valjoux factory.

Mechanical hand-winding watches, wound by twisting the crown to get the watch ticking are the most traditional of designs and are usually top quality. For collectibles and vintage watches, manual watches are popular styles.

Automatic mechanical movement is powered by wrist movement and are appreciated due to their convenience. All are stylish, well aged pieces with genuine leather straps.