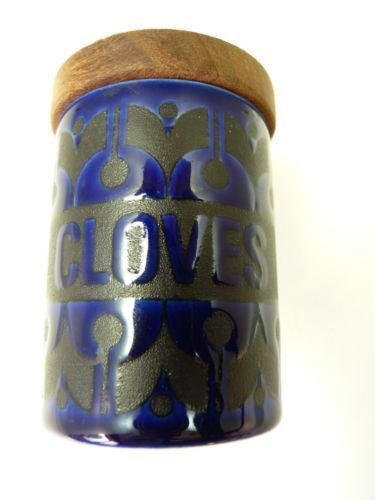 Retro design fans will love Hornsea crockery from the 60s and 70s. Hornsea produced patterns such as Bronte, Tapestry and Saffron, as well as, of course, Heirloom. Heirloom was so popular that in the 70s most people owned something from the range. In fact, at the height of its fame, production couldnt keep up with demand. Hornsea produced tableware and storage jars, as well as commemorative mugs and decorative ornaments.

Produced between 1966 and the 1980s, Heirloom tableware came in three colours: Autumn Brown, Midnight Blue and Lakeland Green. Heirloom pieces were straight sided, as they were designed to be stackable, and decorated with a black design. As well as plates, bowls, cups and saucers, there were teapots, coffeepots and storage jars. Jars had wooden lids with rubber seals and replacement seals can be bought to rejuvenate your vintage jars.

Three other famous Hornsea tableware patterns are Tapestry, Bronte and Saffron. Tapestry is decorated with a cross-stitch style design in olive, blue and white. Brontes design features orange circles with a green/blue thick outline. Saffron is decorated with a stylised daisy design in mustard yellow and orange.

Hornseas Biba-inspired Scroll canisters feature a black swirly design and words such as ‘Coffee, ‘Tea and ‘Biscuits. They have wooden lids and are in bright shades of green, yellow or blue, as well as white. Scroll storage jars make a great vintage finishing touch to your kitchen.

John Clappison was Hornseas Chief Designer and the brains behind many of their ground-breaking patterns. With so many 70s households owning Hornsea pottery, its fair to say he was one of the most influential designers of his time.

Clappison has been credited with making mugs popular in the UK. His mugs feature a variety of animals and zodiac signs. Clappisons cruet sets are delightful too. Look out for salt and pepper pots shaped like cats, owls and birds, in blue, green, yellow or orange with a stylish black pattern.