Shop by Country/Region of Manufacture 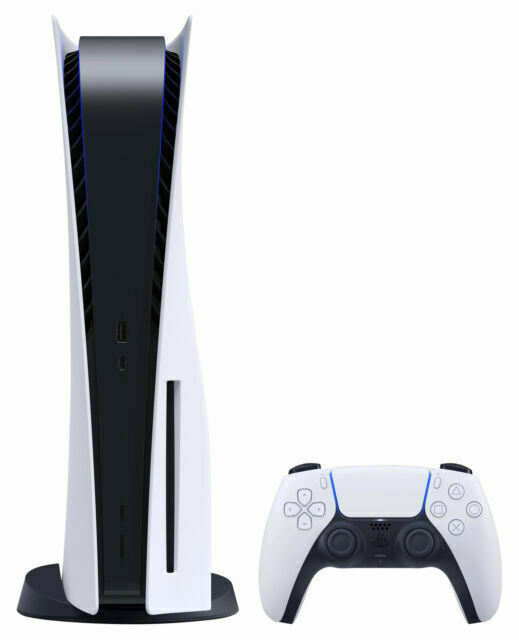 Launched in late 2020, the PlayStation 5 represents a giant step forward for Sony. For a start, you can choose from two separate versions of the console - one with an Ultra HD 4K Blu-ray drive, and one without. The Sony PlayStation 5 is the one with the drive but whichever one you opt for, you'll be getting top quality graphics, high specs, and an incredibly immersive gaming experience. The PS5 has rapidly become a top choice for gamers around the world.

What are the PlayStation 5 specs?

The PlayStation 5 measures 390mm x 104mm x 260mm. This is a powerful new console, and a major improvement on previous PlayStation models. Here are a few of the specs that make for a new gaming experience that's a big step forward from all previous generations:

What's the PlayStation 5 controller like and what accessories are there?

The PlayStation 5 has backwards compatibility with the previous DualShock controller, as well as other PlayStation accessories. However, its new DualSense controller is a major selling point. It has enhanced haptic feedback to replace the traditional rumble mechanism; this will give gamers different levels of response, creating a more immersive gaming experience. It also has an integrated microphone, ideal for online gaming without a headset. The console comes with one DualSense controller, a USB charging cable for it, a base, an AC power cord and an HDMI cable. Other accessories that are sold separately include extra DualSense controllers and compatible charging stations for them.

What kind of backwards compatibility does the PS5 offer and how does it differ to the Digital Edition?

Because it has not Blu-Ray drive, the Digital Edition is slightly shallower than the PS5. The Digital Edition also weighs less, 3.9kg in comparison with the standard machine's 4.5kg. Apart from these differences, both models have a very similar appearance, with a sleek black and white exterior that matches the monochrome design of the new controller. Because it has an in-built drive, the PlayStation 5 offers full backwards compatibility with previous PlayStation games. This means that if you've already built up a library of your favourite Sony games, you'll be able to play them without any problems. However, this will not work with the Digital Edition, as it has no disc drive; instead, you'll need to download digital versions of the games. The PS5 is also compatible with PS VR games. If you already have a PlayStation Camera for PS4, you'll be able to use this with your PlayStation 5 to enjoy the VR experience. Controllers and accessories from previous PlayStations can also be used with the PS5.

What else is important to know about the Sony PlayStation 5?

The adaptive triggers on the PS5 allow you to enjoy dynamic resistance levels that provide more finely tuned game playing. The Tempest 3D AudioTech audio output plays music and sound FX in sumptuous detail that will certainly add to the gaming experience. Furthermore, HDMI 2.1 is supported so gamers using 8K displays will get a fantastic level of visual detail.