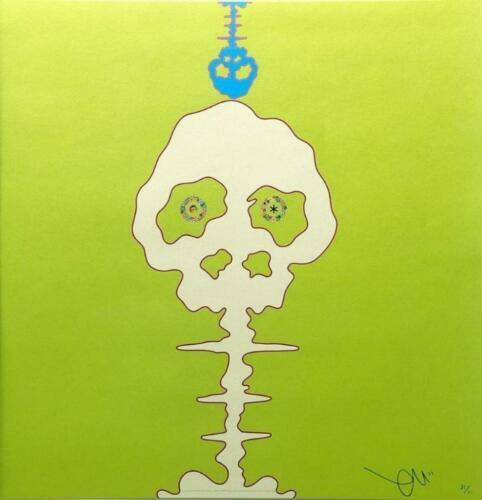 Takashi Murakami is a Japanese contemporary artist and is known for blurring the boundary between low art and high art. He creates paintings and sculptures in the sphere of fine art as well as in commercial media like fashion and merchandise.

Murakami famously invented the term "superflat" to describe both the aesthetic look of Japanese art, and the role of post-war Japanese society and culture. This superflat style gives his work a refined classical Japanese painting technique to depict a super-charged combination of otaku, anime and pop culture in particular.

Theres a huge range of art available, including both prints and originals, right here on eBay.

Murakamis DOB paintings are extremely popular pieces indeed. Their value has been rising steadily in the art market over the last decade and shows no signs of slowing.

This enigmatic cartoon-like character was introduced as Mr DOB by Murakami back in 1993. He is designed to bring together both Japanese and Western animation elements and has become one of the most recognisable of Murakamis creations.

Along with DOB, Miss Ko2 is a particularly memorable character of Murakamis. A young, beautiful waitress who dreams of life as a rock star, she embodies the ideals of sexuality and beauty associated with otaku. She also alludes to the eroticisation of female characters in anime and manga and was the first character to appear in sculptural form in Murakamis oeuvre.

Takashi Murakami is widely recognised for his ability to adapt the distinctive style of traditional Japanese art to exist within the context of popular culture; and what could be more popular and cultural in modern day Japan than skateboarding. Over the last ten years, the artist has lent his talent to skateboard decks and theyre purchased in sets of three depicting his most popular characters. Incredibly sought-after, they are somewhat more affordable than his art prints and come in a massive array of designs.