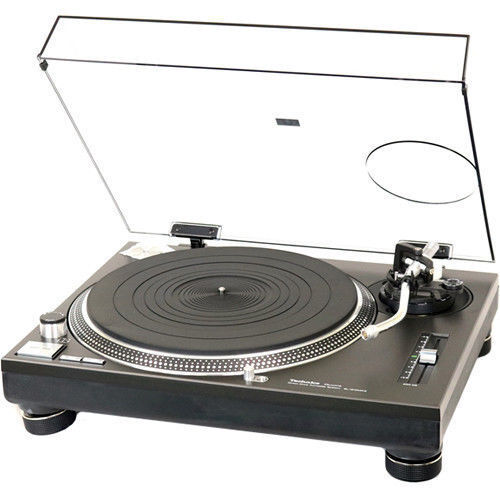 Although many Technics SL1210 MK2 models for sale will come in pairs of turntables, not all are sold in this way. Some are available as single units only, which means that you will require another turntable or audio source if you are to be able to DJ properly. Many of the second hand Technics SL1210 MK2 available on eBay are in good working order because this model has a reputation for reliability and longevity.

What are the differences between the various models in the Technics MK2 turntable range?

The MK2 of the SL1200 turntable range began production in 1979 following the release of the original in 1972. The SL1200 MK2 was available in either silver or matte black, while the SL1210 MK2 was only ever made with a satin black finish. This is the easiest way of telling the two product variants apart. Other differences include:

Is there a Technics equivalent of the SL1210 MK2?

Most of the later generations of Technics professional DJ turntables were new versions of the SL1200. An exception is the SL1210 M3D model which, like the SL1210 MK2, has a voltage switch on the bottom so you can use it with different types of mains electrical supply. The ability to switch is handy if you choose to move around with your turntables rather than have them permanently installed in your DJ booth.

What DJing features does a Technics SL1210 MK offer?

Widely used by performance and scratch DJs around the world, the SL1210 MK2 has a high torque, which is a direct drive mechanism that holds records at the desired speed in a highly reliable manner. This means that you can cue tracks and loop them with a great deal of confidence. Unlike the first generation in the range, all of the MK2s have a slider control for adjusting the pitch of any record being played, which makes it easier to keep track of what you are doing. The base of an SL1210 MK2 weighs several kilos, which helps to prevent unwanted stylus arm jumping, even when people are dancing nearby.