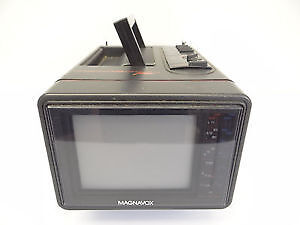 The first mass-produced electric television sets were introduced in 1946-1947 and, as with all things vintage, you might think the older the better in terms of value. However, there are several considerations to make when choosing your collectable TV set, like cost, appearance and functionality. Televisions sets that were limited edition had a unique appearance or unusual features may have more value to collectors.

On this page, you can shop by decade, from the 1950s to the 1990s, with each decade offering something different.

In the 1950s, televisions were characterised by wooden or bakelite surrounds, large control dials and big visible speakers. They were usually free standing and served as a piece of furniture. Not all houses had a TV in the 1950s and those that did would have been eager to have shown their set off in pride of place.

In the 1960s, colour TV sets began to gain in popularity as more shows were broadcast in colour. The design of televisions also changed, with more sets being designed to sit on top of other items of furniture. Some unusual models were introduced in the 60s too, such as the Italian Brionvega Algol 11 black and white television, that has found a place in many modern art museums and the Panasonic TR-005 with its cutting-edge space-age appearance.

In the 70s, television design started to get smaller and the space age appearance caught on, especially with Italian manufacturers. Metals and plastics started to replace wood as the preferred casing materials, making televisions more of an accessory than furniture for the first time.

The popularity of handheld devices continued through the 1990s, when TVs also reduced in depth, moving towards the flat screens that are popular today.