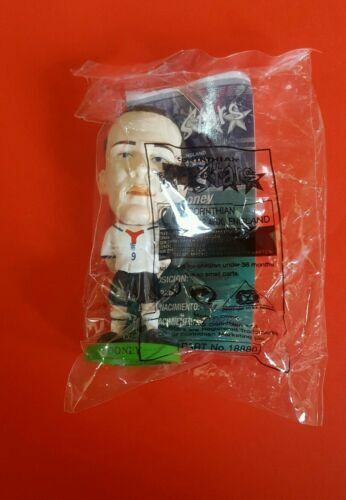 Corinthian Microstars football figures are an iconic collectable of the early 2000s. Microstars ranges have now been updated to include all your favourite stars from across the footballing globe.

Microstars are smaller than Corinthians Prostar figures. There have been fifteen major series of Microstars models released, dating from the 2001 to 2002 season. Originally designed for the English, market Microstars have since been launched across the globe and now have figures featuring the stars of the German Bundesliga, Frances Ligue 1, the Spanish La Liga, Italys Serie A and the American MLS.

Microstars were originally produced as toysavailable inside a confectionary product called a Powerpodz. The Powerpodz were a hollow chocolate ball containing a small capsule. Intact hollow Powerpodz are now incredibly rare. Since series 10, Powerpodz have been released with a figure and several individually wrapped chocolate footballs. Since Series 15 pods have contained two figurines and have also been available in a three pack containing a guaranteed gold player.

Microstars figures enable you to play World Club League, a football based tabletop game. Each Microstars model has five skills based on a passing, tackling, dribbling, crossing, and shooting rating. Goalkeepers have save left and save right rating. Skills are rated by a number between one and five.

The rarity of players was based on the quality of their skills ratings. Rareness is indicated by the colours of the models base. Bases come in green, red, blue, white, silver and gold, with green being the most common and gold being the rarest and most skilled. As the Microstars 3 player packs introduced a free gold model with every pack, the rarity of certain gold players significantly decreased.

As well as footballer figurines, Microstars have produced a range of stands and model stadiums. A microdome stadium enables the playing of World Club League game.