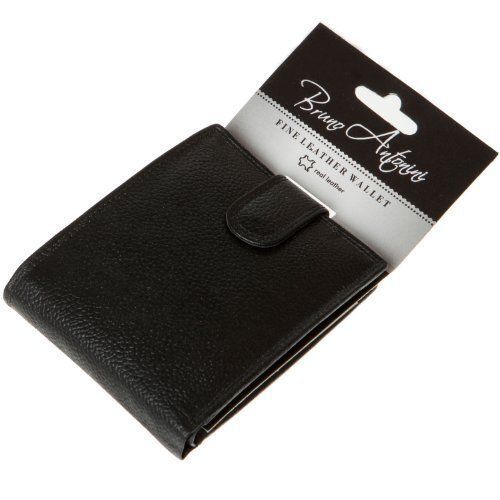 Every man should have a wallet which serves both function and fashion. A significant accessory, it is often presented so many times a day it should create a good first impression. Your choice of wallet will depend on your lifestyle and preference.

Mens wallets are mostly made of leather, faux leather or canvas and have two main designs featuring either snap, zipper or sporty hook and loop closures. Some wallets can be personalised and many have other special additions such as photo and key holders. All styles are available in popular neutral choices such as black, brown and grey, as well as a rich selection of colours.

Bifold wallets are rectangular in shape and fold in half. They have one long open pocket for notes and several either vertical or horizontal slots for credit cards, ID cards and receipts. Practically, bifold wallets are thin enough to be carried in front or back pockets and will shape to the owners body.

Slightly bulkier and heavier trifold wallets are also of a rectangular shape but have two flaps which fold to the centre. As with a bifold wallet, it has a long open pocket and vertical slots for small items. These are a good choice if youre looking for a larger size wallet.

Mens coin wallets are smaller zippered wallets which have a large central pocket to hold coins and notes, plus a number of additional compartments for credit cards and other small items. They can be particularly useful when travelling as some have security features like small locks or rubber strips.

Chain wallets have long associations with popular culture. First seen in the 50s, this particular style of wallet became a bikers boon, as it kept their cash in one place close to their body when cruising or racing on their motorcycles. Leather biker chain wallets saw a surge in popularity later with punks in the 70s and heavy metal and grunge enthusiasts in the 80s and 90s. This particular design of wallet is often still known as a biker wallet or trucker wallet. Chain wallets are available in many designs in materials such as leather, canvas, faux leather or plastic and feature contemporary fastenings such as Velcro ripper strips or double buckles.

Mens wallets were first seen after the introduction of paper currency to the American West in the 1600s. Before this, coin purses (small drawstring leather pouches) were used. Todays modern wallet with it several slots came about in the 1950s, after the invention of the first credit card.