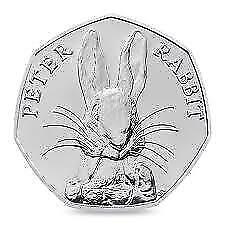 Produced to mark the 150th anniversary of the birth of Beatrix Potter, the popular Peter Rabbit 50p coins feature one of the nations most lovable storybook characters. The limited edition of just 15,000 coins was launched in 2016, showcasing two different designs. The coloured coins with Peter in his smart blue jacket are the most highly sought-after. Following the fantastic reception of the 2016 coins, a 2017 set was also launched with an iconic picture of the cheeky little rabbit running probably away from Mr McGregors vegetable patch.

When it comes to choosing your Peter Rabbit coins, you will notice that some coins are advertised as uncirculated. These coins are often finished to a finer standard than circulating coins. Not only may they be produced to ‘brilliant uncirculated or BU standard, but they are likely to be in better condition thanks to their careful handling by collectors only.

Circulated coins can be a more affordable option but might have scuffs, edge knocks and other imperfections from their time in circulation. For the ultimate assurance of mint condition, you can buy ‘brilliant uncirculated sealed bags of coins that have come straight from the Royal Mint and never been handled.

You will also find a variety of enamelled Beatrix Potter coins. These unique coins are created by artists for purely decorative purposes. Enamel paint is used to add additional designs to the commemorative coins. These coins feature Peter Rabbit in a selection of imaginative outfits and costumes, from Father Christmas to Superman. These fun and colourful coins can be a great gift for young coin collectors who will appreciate the humorous designs. For serious collectors, it is usually better to stick to the untouched coins. But you never know, in years to come that coin of Peter Rabbit dressed as the Joker from Batman could be highly prized.