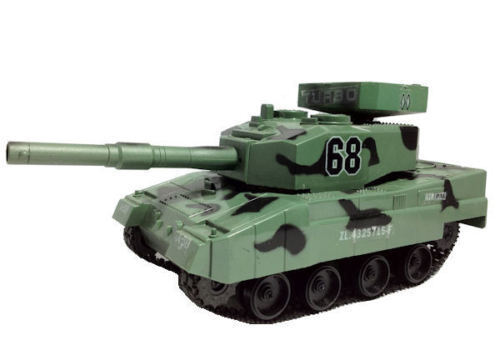 If youre looking for an RC military tank vehicle model with kit, then there is plenty of choice from the options available. Tanks vary in model and brand, with an RC military vehicle usually made to a 1:16 scale and accompanied by a remote control.

There are many options when considering the driving functionality that RC military tanks have to offer. Tanks are able to move forward, backwards and spin a full 360 degrees. Along with these simple functions, military tanks are also able to move left and right at a 360-degree angle and turn its gun vertically up to thirty degrees. Model vehicles can also climb a variety of gradients on different road surfaces up to thirty five degrees, offering the user a reliable suspension system. On some models, there is also a realistic smoke function, letting out smoke from the vehicle, and a powerful motor with an airsoft gun, both have realistic sounds to satisfy the user no end.

Each remote control for the military vehicles provides the user the ability to control all the functions of the tank from one remote and they are ran on just one motor. Model vehicles run on usually eight AA batteries that in some cases can be recharged, although this can vary from model, allowing you to reuse them multiple times and providing hours of fun!

The point of a real military vehicle is to protect its soldiers and shoot the enemy. RC remote control tanks have a realistic sounding gun, just like the real thing! Military model vehicles can fire up to twenty five metres in range and have a great recoil movement, as well a number of tanks offering real smoke effects. Once the engine is running and every time you fire a shot, you will think youre controlling a real military vehicle! Gun firing is bound to be a successful operation using BB bullets, which are very small, six millimetre bullets, to provide precision, accuracy and faster flight.

Military vehicles vary in design, model and brand, however they all provide you with the essential features listed above which, as a collector or beginner to this hobby, are destined to please.