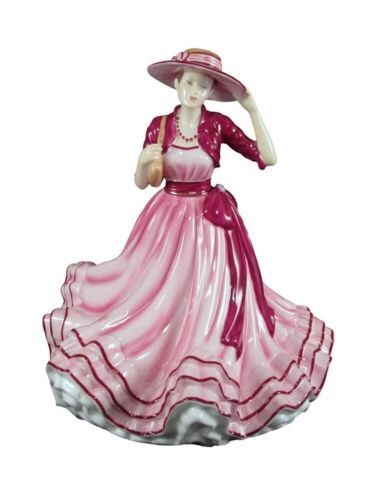 Historic, decorative and iconic, Royal Doulton porcelain and china figurines are collected the world over.

Royal Doulton, a leading British pottery maker since the 19th century, is famed for its ornate figures and charming toby jugs. For more than a century the company has produced figures in an array of different themes, styles and colours. New figurines are still being produced today.

A collector can be drawn to a Royal Doulton figurine for its subject, the collection it is part of, the era it was produced and if it was part of a limited edition run or is discontinued.

Make your choice of figurine by choosing the era it was produced or the style you prefer. Pick from Art Nouveau or Art Deco, or have a look at figurines produced between 1940 and 1959, 1960 and 1979, or 1980 until the present day.

Many Royal Doulton figurines reflect the fashion of the era they were made. Figures may sport hairstyles or clothing indicative of the time, or even be shown in outfits of bygone eras. Look out for men and women in Victorian or Edwardian suits and dresses. There were also many pieces produced (and still being produced) depicting members of the royal family.

Art Deco porcelain figures were created by Royal Doulton between 1920 and 1939 and were inspired by the Jazz Age fashion of the era. These are among some of the most sought after with collectors who admire their fine-quality and beautiful hand-painted finish. Royal Doultons most prolific artist of the day was Leslie Harradine, who produced hundreds of figurines for Royal Doulton and whose work is particularly identified with the Art Deco period.

An enduringly popular collection of figurines by Royal Doulton is Bunnykins, which was created in the 1930s and is still popular with children today. The figurines feature different cute Bunnykins characters, which would make a delightful gift for a child or collector.