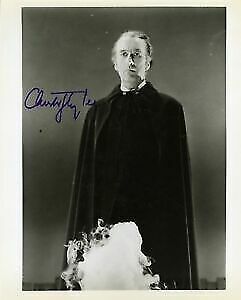 Buying Christopher Lee Autographs - What You Should Know

A giant in the film industry for more than 50 years, Christopher Lee was best known for portraying villains, most notably the famous vampire Count Dracula, in a number of horror films for Hammer Film Productions. He appeared in more than 200 films, and at 80 years of age he acquired a whole new fan base by playing another Count – Count Dooku in Star Wars: Episode II – Attack of the Clones. Lee received numerous honours for his contributions to cinema and was even knighted by Prince Charles, so it’s no wonder the late actor’s autograph is highly sought after.

Is it really Christopher Lee’s signature?

Since you weren’t at the Christopher Lee autograph signing or Christopher Lee book signing, how do you know if the autograph is the real thing? Ask the seller to provide a certificate of authenticity from an authorised and recognised company. It’s not enough for the seller to say he was there when it was signed. A photograph or poster may have been signed using an autopen or printed with the signature already on it. These “autographs” are worth very little. Third-party authentication is essential. If a seller can’t provide this, it’s best to pass and look for another one.

How much is a Christopher Lee autograph worth?

It depends. For this, you should do some research. The famous actor most often autographed photos and movie posters, and he signed books as well. Along with the autograph, the item itself has some intrinsic value. The condition of both the item and the autograph also greatly affect the price. If the item is a torn or badly wrinkled piece of paper then it likely wont be as expensive as an autographed piece of paper that is in pristine condition. Check to see what similar items have recently sold for, both signed and unsigned. A Lee-signed photo may sell for one price, while a movie poster may go for more.

Sadly, the great actor passed away in 2015, so you won’t see Christopher Lee signing autographs at a bookshop or movie premiere ever again. However, this makes his autograph worth more since no further autographed items will appear. A deceased person’s autograph usually goes up in price as time goes by because fewer and fewer are available. Generally, sooner is better than later when buying such autographs.